Cross-Border Deposits: Now That Canada Has Cheque Image Clearing, Can We Scan Canadian Cheques in America?

Since the Canadian banking system’s much-anticipated new clearing system went live in late 2014, two questions we’ve been getting a lot are: “Will I be able to scan Canadian cheques from the U.S. side of the border?” and “Will this lower the fees and wait times when I take a Canadian cheque to my bank?”

For those of you unfamiliar with the process, depositing a cheque from Canada — or most other foreign countries — can be an expensive and time-consuming task. The customer typically must bring the original paper cheque to his or her bank, which charges a fee of up to several dollars, plus foreign-exchange fees, if applicable, followed by a waiting period of days or even weeks before the funds are finally released.

Why all the extra hassle? Well, to be fair, it’s a lot of trouble for the banks, too. Since the two countries’ cheque-clearing systems have never been connected, the only way for an American bank to actually get the money from a cheque drawn on a Canadian financial institution has always been to physically return the cheque to Canada for processing. Often times, they will send all their Canadian cheques to one bank — most likely one of the major ones like Bank of Montreal, TD Bank or RBC that has operations on both sides of the border — and that bank will route it on to its final destination, where (eventually) the funds will be released and the American bank notified. Sending the cheque to the Canadian “gateway” bank takes time and money, and of course, it costs the gateway bank money to finally clear the cheque as well. So in the end, it’s a lot of work and a lot of waiting for everyone.

One day, it may not be like this. Right now, scanners are deployed all over the world in places like Egypt, Australia and France for the sole purpose of scanning American cheques and transmitting them back to the U.S. electronically. These are typically in places like hotels, embassies and tourist attractions that draw a lot of American tourists or expats, and most of these outfits keep an account at a U.S. bank. But the point is, if it’s an American cheque and you’re doing business with an American bank, you can transmit the cheque from anywhere in the world.

So, now that Canada has image-based clearing, shouldn’t we be able to just scan and send an image — whether it’s the customer or the bank doing the sending? The answer is not yet. While American and Canadian cheques are very similar, one problem for machines is the different MICR numbering systems used in the magnetic ink at the bottom. If an American remote deposit or bank back-office system sees a cheque in the Canadian format, it will spit it out as an error.

Would it be possible to fix this? Yes, but it would take time. While it may seem simple enough to program a second set of MICR code rules into an American scanning system, there is also the matter of segregating the foreign cheques from the U.S. cheques, and preparing them in a different file format for a separate transmission to a different place. So it’s a bit more complicated, and likely a matter of when the banking-systems makers have time to write an update somewhere between moderate and major into their software, or until banks find a different workaround. For the time being, the answer is still “coming soon.” 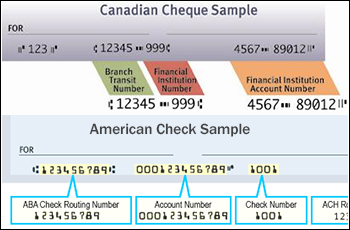 To discuss the needs of your business or for any inquiries

This website uses cookies to improve your experience while you navigate through the website. Out of these, the cookies that are categorized as necessary are stored on your browser as they are essential for the working of basic functionalities of the website. We also use third-party cookies that help us analyze and understand how you use this website. These cookies will be stored in your browser only with your consent. You also have the option to opt-out of these cookies. But opting out of some of these cookies may affect your browsing experience.
Nous utilisons des cookies pour améliorer votre expérience pendant que vous naviguez sur ce site Web. Parmi ceux-ci, les cookies classés comme nécessaires sont stockés sur votre navigateur car ils sont essentiels à l’utilisation des fonctionnalités de base du site Web. Nous utilisons également des cookies tiers qui nous aident à analyser et à comprendre comment vous utilisez ce site Web. Ces cookies ne seront stockés dans votre navigateur qu'avec votre consentement. Vous avez également la possibilité de désactiver ces cookies. Mais la désactivation de certains de ces cookies peut affecter votre expérience de navigation.
Necessary Always Enabled
Necessary cookies are absolutely essential for the website to function properly. These cookies ensure basic functionalities and security features of the website, anonymously.
Functional
Functional cookies help to perform certain functionalities like sharing the content of the website on social media platforms, collect feedbacks, and other third-party features.
Performance
Performance cookies are used to understand and analyze the key performance indexes of the website which helps in delivering a better user experience for the visitors.
Analytics
Analytical cookies are used to understand how visitors interact with the website. These cookies help provide information on metrics the number of visitors, bounce rate, traffic source, etc.
Advertisement
Advertisement cookies are used to provide visitors with relevant ads and marketing campaigns. These cookies track visitors across websites and collect information to provide customized ads.
Others
Other uncategorized cookies are those that are being analyzed and have not been classified into a category as yet.
SAVE & ACCEPT